Bed Bugs (Cimexlectularius) are small, wingless insects exhibiting all of the characteristics required to be considered a “true” bug. A persistent human parasite throughout recorded history, the widespread use of synthetic insecticides after World War II led to a sharp decline, and near total eradication, in bed bug populations in most industrialized countries. Almost non-existent in the United States by the early 1990s, the Bed Bug has proven very hardy with its sudden and profound resurgence. The cause of the Bed Bug return is widely debated. However, most experts agree that it’s a combination of factors. The ongoing discontinuance of insecticides by regulatory agencies has limited the availability and use of highly effective insecticidal products. Combined with the dramatic increase in global travel, Bed Bugs have been set to return in force. 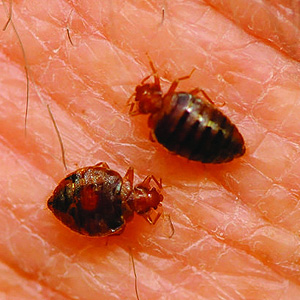 As stated above, Bed Bugs are considered a “True Bug” possessing all of the characteristics necessary…3 body segments, six legs, piercing-sucking mouthparts, and gradual metamorphosis. Bed Bugs progress through five nymphal stages and must feed at least once to develop to the next stage, molting between feedings, in a progression to reproductive maturity. Adults feed every 3 to 5 days throughout their estimated 6 to 12-month life span but can live up to a year without feeding. Most adult Bed Bugs are about 1/4-inch long, oval, flat and reddish-brown. They give off a distinctive musty, sweet odor often similar to raspberries or coriander. They often defecate while feeding leaving signs of infestation (rusty or tarry spots) on sheets and in resting places. Pea-sized pearly white clusters of 200 to 500 eggs may also be evident in larger populations. Bed Bugs prefer warm temperatures between 83°F to 90°F but can survive in wider ranges. Bed Bugs typically like high humidity environments as well. 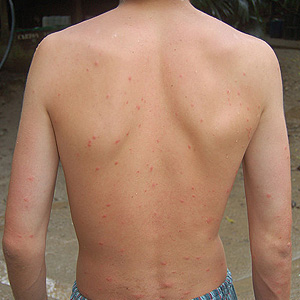 It’s Not Your Fault You Have Bed Bugs 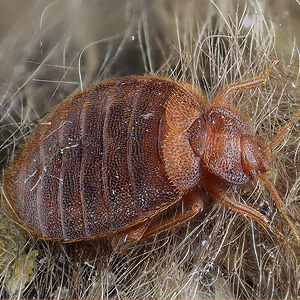 Contrary to popular belief, Bed Bugs are not caused by poor sanitation. Similar to other parasites such as lice and fleas, Bed Bugs are creatures of convenience. Infestations are more commonly associated with a chance encounter, introducing a breeding population into your living environment. You can bring Bed Bugs home by staying in a home, college dormitory, hotel or other similar facility that contains an infestation. The eggs can travel, to infest your home, by catching a ride on your suitcase or clothing but it’s much more common for the adults to do so.

Do You Have a Bed Bug Problem?

Bites, odor and voiding smears are indicators of a bed bug problem. But if you have no reaction to their bites, they may go undetected until you become infested. Bed Bugs are easily confused with other nuisance bugs like carpet beetles, bird and rodent mites, shiny spider beetles, parasitic wasps, even lint by the more paranoid few, making diagnosis of an infestation best left to the experts at Peachtree Pest Control.