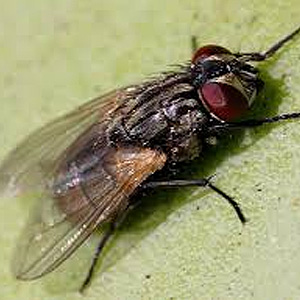 Flies are insects that have one set of wings in the adult stage. They grow through the process of complete metamorphosis with life stage of egg, larva, pupa and adult. The larval stages are commonly called “maggots”. Flies are worldwide in distribution and there are estimated to be over 240,000 different species. Only about half this number have been identified and described. The order Diptera includes insects such as house flies, mosquitoes, gnats, midges, bottle and blow flies. Flies, especially mosquitoes are vectors for some diseases in humans such as dengue, malaria, yellow fever, encephalitis and other infectious diseases. Others are known to spread food-borne illnesses such as salmonella. 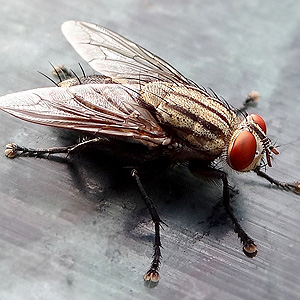 Flies have one pair of wings. The house fly has four dark stripes on the top of the thorax between the two wings. They can use a variety of materials for breeding such as animal and human excrement, garbage, decaying vegetable matter and soil contaminated with such material. Having sponging mouthparts, the adults can only ingest liquid materials or solid material which has been liquefied by the regurgitation of digestive juices onto the material which is then ingested as it becomes liquid. Larval stages called maggots are found in almost any warm, moist material that will furnish suitable food for growing larvae. 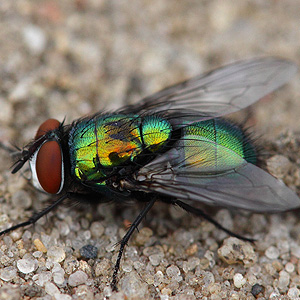 Blow flies and bottle flies are closely related and can look very similar to each other except in color. The bottle flies are usually bright metallic green or blue while the blow flies are usually a dark non-metallic color. Both are readily found around garbage dumps, slaughter houses and meat-processing plants. Large black blow flies can be found inside structures where an animal has died, such as a rat or mouse, which is used as a breeding site. Large numbers of these flies may be produced inside by such an occurrence. 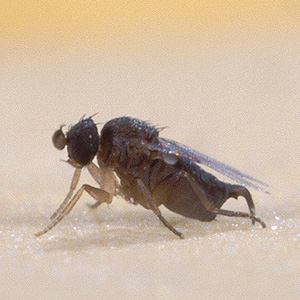 Called “humpbacked flies”, Phorid flies are small to minute flies that resemble fruit flies. They are typically found around decaying plant and animal matter. Inside they are associated with plumbing that is leaking and drains in bathrooms and kitchens as well as garbage containers. If sewage is leaking from a pipe and contaminating soil in areas such as a crawlspace or underneath a concrete slab, these flies will breed in the soil that is contaminated with the sewage making them hard to control or eliminate. Sanitation is key to long term control of these flies. 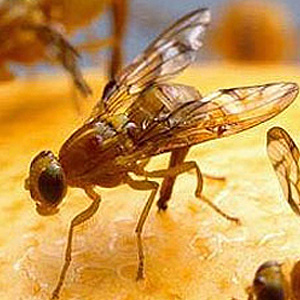 The fruit fly is a small fly with red eyes that is considered both a nuisance pest and as a contaminator of food items. Large populations can build up quickly in food processing establishments and restaurants, especially where there are bars and fermenting fruit used in such areas. Eggs are laid near the fermenting material or food debris that clings to the inside of most drains, where they live near the surface of this material. Sanitation is the key to long term control. 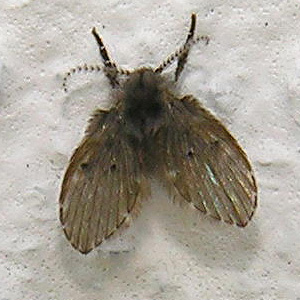 This small fly appears to be covered with hairs over its entire body including the wings. They typically are found resting on the walls of restrooms, bathrooms and kitchens. Larvae are found breeding in the overflow areas of sinks, dirty garbage containers, garbage disposal units and almost anywhere decaying organic matter is found. Sanitation is key to the control of these flies. 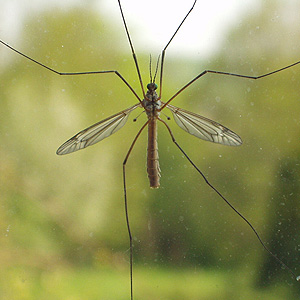 Crane flies, although they are not mosquitoes, are mistaken for mosquitoes by most people. Sometimes called, “mosquito hawks” or “mosquito eaters”, they do not feed on mosquitoes or bite people. There are about 14,000 different species of crane flies which range in size from small to large and can appear quite different from species to species. They are not important pests other than the nuisance they cause from being attracted to lights along with their large size which intimidates most people.