Ant infestation is a very common pest problem throughout Atlanta as this pest can cause pain from stings and damage to your home or business. Professional help is always necessary to control an ant infestation in house, in yard or in lawns. At Peachtree Pest Control Atlanta, we provide the most effective solutions for eliminating your ant problem. You can count on us! That’s our commitment to you… it’s our Peachtree Promise! 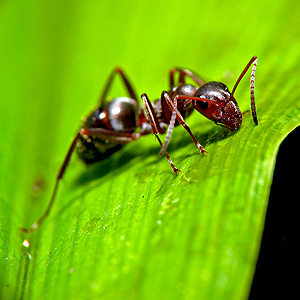 Ants are one of the most common and one of the most difficult pests to control. Ants enter indoors through even the tiniest cracks, in search of food and moisture. The ants foraging in and around your home or office are workers. Workers that find food share this information with other worker ants by leaving a chemical trail along the substrate as they crawl back to the nest. This “trail pheromone”, which is undetectable to humans, adheres to the substrate for long periods of time and helps other ants find the food at the end of the trail.

They can be a nuisance pest with just a few scouts in your house looking for food, or the dreaded and dangerous Fire Ants and Harvester Ants. Medically and economically speaking, they may affect people by stinging and biting; by invading and contaminating food; by nesting in lawns, golf courses and premises causing damage; by stealing seeds from seed beds or by feeding on germinating seeds; by defoliating or gnawing into plants and plant products, fostering other injurious insects like plant lice, mealy bugs and plant diseases and fungus; by gnawing holes in fabrics, and by removing rubber insulation from phone wires or other equipment; by killing young poultry, birds, livestock or game; and Carpenter Ants can seriously damage wooden structures.

However, only a few of the ant species are actually anything more than just a nuisance pest. Some of these ant pests are the Odorous House Ant, Argentine Ant, Fire Ant, Pharaoh Ant, Harvester Ant, and the Carpenter Ant. 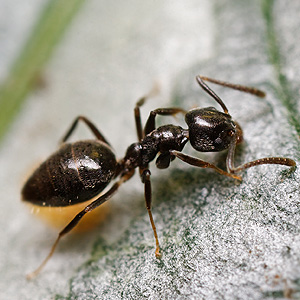 Workers are about one-eighth inch long and are all the same size in the colony. They are black, with a single node which is hidden by the front of the abdomen. May have many queens in the colony which makes them difficult to control. They may enter homes when colonies become very large, natural food or water sources become scarce or when climate conditions are extreme (drought or flood). Sweet foods are preferred, but they will eat protein foods such as meats and cheeses. Outdoors they feed mainly on honeydew that is produced by insects such as aphids and mealybugs. Elimination of food, water and nesting sites is critical for long term odorous house ant control.

Workers are about one-eighth inch long and are all the same size in the colony and are dark brown in color with a single node that is pointed. Colonies may have many queens making them difficult to control. Outdoors nests are found under shallow nests in moist areas, including under boards and stones, beneath plants and along sidewalks. They can establish well defined trails which can be very wide with multiple lanes of workers going both ways. They are very aggressive to other ants in their territory and may eliminate all other ant species where they are found.

Argentine ants prefer sweets such as honeydew, fruit juices and plant nectar. Elimination of food, water and nesting sites is critical for long term Argentine ant control. Vegetation should be trimmed away from touching structures as these are used to gain entry inside. Argentine ants typically live outdoors during the warmer times of the year, but move inside when the weather begins to turn cold. Thorough perimeter treatments during the late fall can help to reduce the chance of colonies moving into structures. 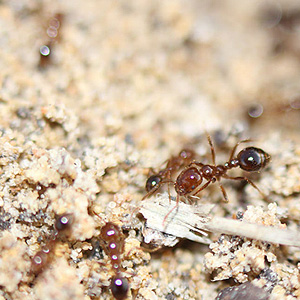 Red Imported Fire Ant workers range in sizes from one-sixteenth to one-quarter of an inch long in the same colony. Mounds are usually built in the sunny areas of soil or lawn, and can be anywhere from a few inches to several feet across with multiple holes across the surface of the mound. When disturbed, the ants come boiling out from all the holes of the mound. The workers possess a sting which is very painful, and which develops into a raised, sore area with a white pustule in the center.

The Red Imported Fire Ant is a serious medical, agriculture and property pest. Mounds that are in areas where there is a lot of activity (high traffic areas) should be treated with ant control products that are fast acting. Mounds that are in low or no traffic areas should be treated with a bait designed for fire ants. In the cooler months of the year, mounds will appear next to items that hold some heat through the night such as curbs, sidewalks, driveways, structures, electrical poles and boxes, etc…

Although complete fire ant eradication is not possible, recent advancements in product technology and application techniques have allowed homeowners to attain acceptable levels of pest management. That’s where our Peachtree pest control services for ants can help.

Acrobat Ant workers are one-eighth of an inch long and are all one size in the colony. They are reddish-brown in color and can raise the “heart-shaped” abdomen up and over the thorax when disturbed. One set of spines are on the top of the thorax. They do possess a stinger but seldom use it. Indoor nests can be found in areas where water damage has occurred, in decayed or damp wood, or inside insulated wall panels. Outdoors they can be found under rocks, logs, firewood, or hollows of trees. They use utility lines, shrubs, branches, pipes and anything that touches the structure in order to gain entry inside. They eat a wide variety of foods, including sweets and proteins.

Carpenter ants are large ants, measuring over one-quarter of an inch or larger. They come in varying colors depending on the species. If found inside structures, especially in the Southeast, they are very good indicators that water has infiltrated the structure. Typically active in the evening and at night, it may be difficult to locate the colony in the daytime as there is usually little or no activity during the day. Debris which they kick out of their nesting areas may be the first signs of a carpenter ant problem inside and are usually satellite colonies. The main colony is typically found outdoors in the hollows of trees or stumps. All types of food items are used, plant juices, insects, meats, cheeses, to name just a few.

At Peachtree Pest Control Atlanta, our well-trained ant control specialists have the tools and training necessary to provide the highest level of ant control and treatment possible. Our specifically tailored programs deliver a twice per year application, typically during spring and again in the fall. Best of all… our programs are guaranteed to work or we’ll come back for FREE! So give Peachtree Pest Control a call today and get your home or yard back!

Check our ant control services that we provide in the following areas: