German roaches are brown to dark brown in color. They have two distinct parallel bands running the length of their pronotum. The sexes can be distinguished by the more slender body of the male. Adults are approximately ½-inch in length. German roaches are the most widespread of all cockroaches in the United States. They complete their lifecycle in approximately 100 days, and they breed continuously (with many overlapping generations present at any one time). Under ideal conditions, it has been estimated that one female German roach can be the cause of a population explosion of over 1 million. German roaches are commonly found in and around apartments, homes, supermarkets, restaurants, and similar commercial facilities. They prefer areas near food, moisture, and warmth. German roaches often litter food or food products with their feces and defensive secretions. They also physically transport and often harbor pathogenic organisms, and in some cases may cause severe allergic reactions. 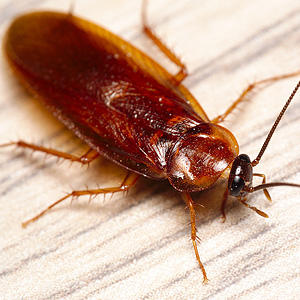 The German cockroach is very successful at establishing an ecological niche in buildings, and is very hardy and resilient against attempts at pest control. This is because of the large number of nymphs produced from each egg case, the short period between birth and sexual maturity, and their ability to easily hide due to their small size. The female also carries the egg case (called an ootheca) with her during the germination period, rather than depositing it like other species. This cockroach is also smaller than many other species so it can more easily hide and fit into very small cracks and crevices to evade humans. That is also the main reason they can most effectively be controlled with baits in cracks and crevices near harborages. These types of pest control methods should kill 95% of the overall population in a property due to their fast reproductive cycles. Peachtree Pest Control uses “Low Risk” products such as baits, and IGR’s (Insect Growth Regulators). These products only affect the roaches themselves and have zero effect on mammals, birds, fish, and other non-target organisms. 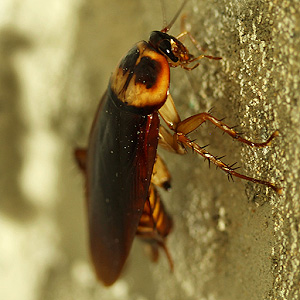 Identification of conditions conducive to the existence of German roaches is vital in providing long term control. These conditions will include the presence of food, water, and shelter. Removal of any or all of these items limits the likelihood of initial as well as recurring infestation. Areas of special concern may be commercial kitchens and break rooms throughout the facility. Addressing cleaning schedules and proper sanitation practices, food storage areas and cardboard management plans (which are common agents of German Roach introduction), as well as sealing of cracks and crevices throughout the facility thus removing excess pest harborage areas, would be integral parts of a successful program. As a part of Peachtree Green, Peachtree Pest Control will provide clear documentation outlining solutions to each of these areas. Usually this involves working to establish written protocols on cleaning schedules, food storage protocol, and cardboard management. Additionally and where applicable, Peachtree Pest may also perform the work necessary to correct these pest friendly conditions as part of the Peachtree Green service.