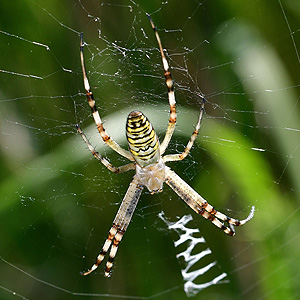 Spiders are arthropods that have two body regions, the cephalothorax and abdomen, and have eight legs. There are apporximately 40,000 known species of spiders worldwide. Most all spiders are beneficial due to the fact that their major food items are insects, so they help keep insect populations in check. However, a vast majority of people are uncomfortable with spiders being around them. In the U.S., only a few spiders are important from a human suffering standpoint such as the black widow, brown recluse and the hobo spiders. Pest management of spiders concentrates on the elimination or reduction of the conditions that cause spiders to be present. Turning off exterior lights on buildings that remain on at night will have a huge impact on the number of spiders found in and around a structure. These lights attract large numbers of insects which the spiders are attracted to for food. Reducing the numbers of insects in a building will also reduce the number of spiders inside. 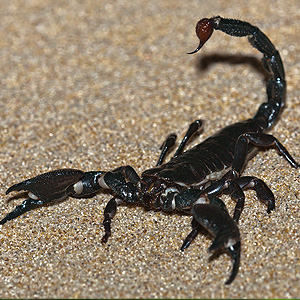 Scorpions are nocturnal arthropods which means they are active at night, searching for mates and food items. During the day they are hiding in dark areas, out of sight. Their main food sources are insects, millipedes, centipedes, other scorpions and any other small animal they can grasp and sting. They have one set of pinchers or claws, eight legs and a stinger at the end of the tail that is typically held over the back, and ready to sting for protection or killing their food. There are over 1,500 different species of scorpions that have been described. Only about 25 are known to be a danger to humans when stung. Usually the larger the scorpion species, the less danger they pose. The smaller, the more dangerous. If you live near wooded areas, you have a greater chance of encountering scorpions than if you live in an urban area with no wooded areas nearby. Controlling insects will greatly reduce scorpions being seen in or near structures. 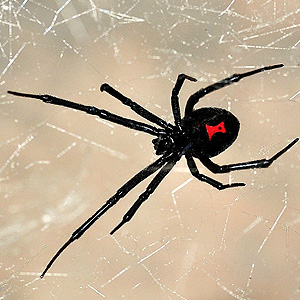 The black widow is one of the most important spiders due to its ability to bite humans and inject poison. The adult females of the spider is glossy jet black in color, has a ball-shaped abdomen, and a much smaller cephalothorax. Markings can range in color from yellow, orange or the usual red and appear as lines and hour glass markings. The hour glass is on the underneath of the abdomen. Black widows make irregular looking webs and are usually found behind items store against walls on the outside of structures or in storage areas such as sheds and garages. 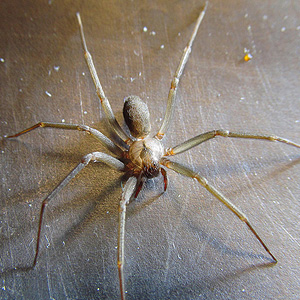 Also know as the “violin spider” this spider causes the most serious bite wound of any of the spiders occurring in the United States. The bite area will turn into a large open ulcerous wound as the venom causes the tissues to die. Unfortunately, these bites look a lot like wounds that appear when a break in the skin gets infected with Staphylococcus spp. bacteria causing misdiagnosis of a brown recluse spider bite when it’s not. The spider has a “violin” marking on the top of the cephalothorax and has very long legs compared to the body with a grayish colored abdomen. 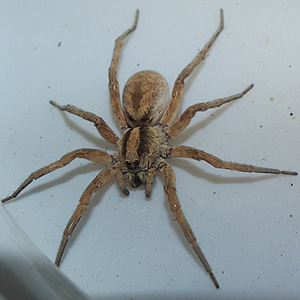 The wolf spiders are hunting spiders which although they have the ability to spin webs, do not do so for catching prey. The female carries the egg sac with her wherever she goes. Once the young spiderlings hatch from the egg sac, they ride on the mother’s back until old enough to fend for themselves. Some wolf spider species are quite large causing a fear reaction in most people as they are also very quick. They feed on insects and other spiders. 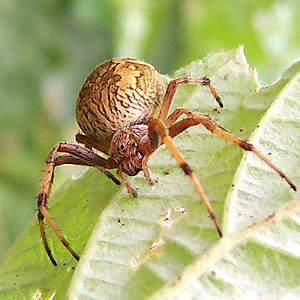 Orbweavers are the spiders that make the biggest, most beautiful webs that we see. Looking like wheels, these spiral webs are typically constructed between two items that are usually a few feet apart. The spider may be found in the center of the web resting face-down or up in the corner if there is shelter. They feed on anything that gets trapped in the web, especially insects and other spiders. They have even been known to feed on small birds that are caught.